Why Is Islam Taking Over Europe? Or, Is It? 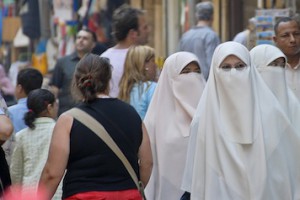 When you read in the news about the Muslim takeover of Europe, consider the following before you take the bait:

Sweden has 9.5 million population. At the most, 451,000 of them – close to 5% of the population – are Muslims. This number is the highest available estimate, from a report by the PEW Research Center, which provides no clear methodology for this number. Swedish independent – and free-market-oriented – sources criticize this estimate noting that the PEW’s estimate for Sweden includes “people with roots in Muslim countries.” This, of course, is not a very reliable indicator, given the fact that Christians are disproportionally more represented among the immigrants from Muslim countries. For example, Arabic Christians in the US are 63% of the total Arabic population of the US, compared to 5.5% in the Arab countries. In Sweden, the largest immigrant community with “roots in Muslim countries” are the immigrants from Iraq, a total of 130,000 which would be included in the PEW’s report. But of these, 120,000 (92%) are Assyrians who are traditionally Christian, not Muslim. The second largest immigrant community in Sweden “with roots in Muslim countries” is the Iranian community – about 68,000 people – but it is comprised mostly of dissidents and opponents to the Islamic regime in Tehran, and most of them profess to be secular and agnostic/atheist in their views. The most realistic assessment about the number of people of Muslim background in Sweden, then, would be no more than 200,000, and by the assessment of Muslim scholars in Sweden, only 100,000 are “religious,” of which only 25,000 are “devout Muslims,” that is, practice their religion according to its rules. Which means, for Sweden, 1% religious Muslims, ¼ % practicing Muslims. Which is about the same percentages for Houston Metropolitan Area, with its 60,000 practicing Muslims out of a population of a little over 6 million.

And yet, the Internet in the last several years is full with reports of how the Muslim immigrants of Sweden are taking over the country. The Swedish police reportedly has given up on maintaining order in 55 “no-go” zones throughout the country, which correspond to the areas with highest percentage of Muslim immigrants. There is an “explosion of rape in Sweden” which most observers connect to the Muslim presence in the country; and the government doesn’t seem capable of dealing with it. Anti-Muslim attitudes are on the rise in Sweden, as they are in all the other countries in the European Union.

All this because of 1% of the population.

What about France, which has the second highest percentage in the European Union of Muslim population? (The highest is Bulgaria with 14%.) The estimates, of course, are still not definitive, they vary from 5 to 10% (the highest figure is by the US Department of State, the lowest by the French government). There again, since the government census agencies can’t legally ask about religious adherence, the estimates are based on country of origin. The question of whether the person practices their religion or not is allowed, and only one-third of the immigrants from Muslim countries declared to be practicing their religion. Which, if one takes 6 million as the number of immigrants from Muslim countries, gives a total of 2 million practicing Muslims in France, or around 3%.

What is less known to the general public is that while the immigrant communities in France are blamed for the spread of Islam in France, the truth is that these immigrant communities have a thriving Christian, church-centered culture that is outpacing Islam on all fronts. For example, Greater Paris (4 départements) has about 75 mosques and prayer centers, the largest of which can take about 1,000 people; the estimated Muslim population of Greater Paris is 1.6 million. This is a very low figure compared to Houston which has over 40 mosques and prayer centers for only 60,000 Muslims. To take the comparison back to Paris, only one of the Greater Paris’s départements, Seine-Saint-Denis, has over 250 evangelical churches – and that in a nation that is traditionally Roman Catholic and secular agnostic. The list of those only who have decided to register for the online catalog of churches far outnumbers the list of all mosques in Paris. The majority of these evangelical churches serve the immigrant community, and they are much more influential in both evangelism and in forming the culture of the immigrant community than anything Islam can offer. On that list, there is even a Portuguese Assembly of God, a Laotian Evangelical Church, several Cambodian evangelical churches, several Gypsy churches, etc. The large Muslim community is not safe from the advance of Christianity: in France, an estimated 15,000 Muslims convert to Christianity every year.

And yet, France has become a proverb in the mouth of many French and foreign observers as a nation that has almost surrendered to Islam. The riots of several years back were widely reported as almost another French Revolution – or Muslim Revolution, if you wish. Just like Sweden, France is now reported to have 150 “no-go zones” where no European can go into, and the police are helpless.

All this because of 3% of the population.

Enter Switzerland. Unlike Sweden and France, the government agencies of the Helvetic Confederation not only can, but by law they do ask about the religious adherence of the population. The reason is simple: while there is no state church in Switzerland, most cantons tax the population to support the religious establishments, and the amount of support is based on the number of adherents. So, unlike Sweden and France, we don’t have to “guestimate” the percentage of Muslims in Switzerland: It is officially declared to be 4.9%. If we take the maximum estimates about Sweden, it’s about the same percentage as Sweden. If we take the realistic estimates about Sweden, Switzerland has 5 times as many Muslims as Sweden. And about the same percent as France. Which is to be expected, given that Switzerland has the highest percentage of immigrants of all European countries, and it has kept its borders open to immigration. Unlike Sweden and France, the Muslim minority in Switzerland doesn’t seem plagued by economic discrimination and unemployment; to the contrary, Muslims are fairly middle-class in Switzerland. Given that Switzerland is a small country, with the high percentage of Muslims, one would expect that it will have the same problems with its Muslim population as France and Sweden.

Guess what. It doesn’t. There are no “no-go” zones, no increased crime due to Muslim immigration, no isolated communities, no burned cars nor raped local women. In fact, when 6 years ago the Swiss voted in a national referendum in favor of a ban on the construction of minarets, the Swiss Muslim minority took it very calmly. And that despite the urging by political and religious leaders of Muslim countries to protest the decision. More than 400,000 Swiss Muslims went about their business without uttering anything more than regret for the results of the referendum.

Strange, isn’t it. So, why is this difference between Sweden and France on one hand, and Switzerland on the other? And even more important, how is it that a miniature minority can leave the impression that it is taking over the country, or destroying a civilization? It is true that historically, small groups have been capable of overturning empires that lasted for centuries – witness the Bolshevik revolution in Russia, or the Fabian socialists in Britain. But then, those groups have had the ideology and the propaganda base, the centralized organizational core of committed activists, the high social status of their cadres, etc. There is nothing like this in European Islam: no central leaders, no distinctive ideology propagated to the masses, no ideas for social reconstruction or government, no hierarchical structure with strict discipline. A quick look at exchanges between devout Muslims on internet forums shows that the majority of discourses are rather childish, on household issues, and very little on social, political, economic, etc. issues. How is it that a religion that can’t produce maturity at levels higher than teen age be a threat to the civilization, especially when present in such low numbers?

While Islam is a horrible man-made religion, very similar to the European Enlightenment in its beliefs about the deity, it hasn’t proven to have any civilizational strength to survive for a long time on its own. Every time it has met a determined Christendom on the battlefields of either military or cultural contest, it has retreated, even when having on its side superiority in numbers and resources. And every time it has won battles and wars, it was against enemies who had already lost their will to fight and survive. And even when it had the upper hand, it was due to borrowing manpower, science, and technology from non-Muslim cultures, and especially from Christendom. Missionaries to the Muslim world of 100 years ago report of “spiritual despair” and “atheism” as being prevalent in the Muslim world, and of the spread of Protestant Christianity in Egypt, then the most populous and most educated Muslim nation. (See here and here.) On its own, Islam can’t produce enough to survive, let alone present a viable alternative – or threat – to the Western civilization.

What has happened, then?

What has happened is not the growth of Islam, but a failure of nerve in the very same West which just 100 years ago was in the strategic position to overwhelm the Muslim world and finish Islam off as a global force once and forever. Small minorities of a few percent of the population, without clear ideology and leadership, can’t be a serious threat to any civilization; if a civilization sees them as a significant threat, that can be only because that civilization has lost the will to fight and survive. And the loss of that will to fight and survive is an indicator of a deeper, more fundamental, more profound loss: the loss of the spiritual foundation that made the West possible.

The reasons for this failure of nerve are many and should be the topic of another article. For now, keep in mind, every time you watch news of the supposed “Muslim takeover” of Europe, that there is no such takeover; the numbers and the facts do not support such analysis. Islam is not Europe’s problem; it is only a symptom of the real problem. The real problem is spiritual and ethical, and it has nothing to do with the presence of a few Muslims in Europe.

And only by focusing on the real problem – the failure of nerve and the reasons for it – we can hope to come up with a solution. While our eyes are centered on the symptoms, we can’t have solutions.