If You Thought Conservative Logic Made More Sense Than Liberal Logic 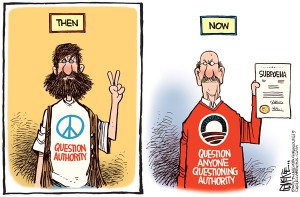 Yeah, those were the days, my friends, when conservatives were all about questioning authority. Obamacare was passed, and the conservative half of the active voting population was up in arms about it. Just google “We will not comply,” if you don’t remember how it was. Remember when Nancy Pelosi said about Obamacare, “This is now the law, you have to obey it”? What indignation, what outrage came from all the conservative media about such proposition that we should obey a law passed legitimately by an elected body! There were talks about the Second American Revolution, about generals arresting Obama, guns and ammo were bought in huge numbers. Ah, yes, Clive Bundy Ranch, remember that? How patriots from all over the country went there to stand against the government to protect a rancher’s family? The good old tradition of standing up to the government and not obeying, not complying, not giving up, until the government backs down.

But it’s those days. Things change, you know. First we had the immigration scare earlier this year. And conservatives suddenly re-discovered the value of obedience to the government: “If immigrants were decent people, they would have obeyed our laws.” Suddenly the Feds in the face of Border Patrol were good and nice and trustworthy folks again, and all conservatives united behind the Federal troops. Then Michael Brown was killed, and the cop was exonerated while the Democrat political machine in Missouri built a propaganda case for him, designed to make conservatives support him. And guess what, now the conservatives discovered not only the value of obeying the laws – that were passed by Congress – but also the value of unquestionable obedience to any orders from police, whether lawful or not (and state your grievance later, of course, after you are killed, or maimed, or your child is disfigured by a flash-bang grenade). Yup, no kidding, here it is:

You gotta hand it to the liberals, though, for it took them about 40 years to evolve from “question authority” to “don’t question authority.” Pretty obstinate folks, them liberals, quite inflexible, almost conservative. Conservatives are way nimbler: they changed within a few months. One has to go with the times, after all, what was good yesterday is not necessarily good today. That’s true conservatism, ain’t it?