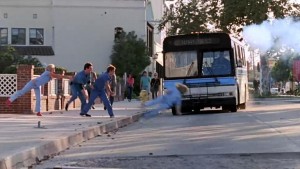 I preferred to remain silent during the whole Zimmerman trial. After all, not having grown up in the US, the whole preoccupation with skin color is foreign to me. I say “skin color” because “race” is a rather stupid designation for it. How much of a nuance of brown is needed for two persons to be of different “races”? And what race is Zimmerman? Is he of the German race, or of the Hispanic race, of is he black, given his maternal genetic ancestry? And even on his father’s German side, who knows what Hunnic or Slavic or Celtic or Latin genes there are. As far as Zimmerman’s looks are concerned, he looks every bit Hispanic like many of those here in Texas whom I meet in the church, at work, and in the grocery store. And that’s what he claimed about himself – that he was a Hispanic. So, if this was about race, is it about Hispanics vs. blacks? And since Obama is defending the young thug who died – shot perfectly legitimately, as far as I am concerned – which side of Obama is defending Martin? His white side or his black side? Is this now White and Black against Hispanic, or is it Black against German? Or may be, given Zimmerman’s black genetic ancestry, may be it is Black against Half-breed? Oh, wait, Obama is Half-breed too, by genetic “racial” standards.

The utter stupidity of anyone who uses the standard of skin color is obvious to me. Or, rather, the stupidity of those who bite that bait. Of course, it is clear to me that the liberal media and their political puppet-masters are not so stupid; they perfectly fit the description of Booker T. Washington:

There is a certain class of race-problem solvers who don’t want the patient to get well, because as long as the disease holds out, they have not only an easy means of making a living but also an easy medium through which to make themselves prominent before the public.

Clear and concise, and fits the modern Democrat Party perfectly.

But that wasn’t news to me, and hardly was news to anyone with common sense and sober mind who was watching the trial. In fact, nothing in the trial surprised me, given the situation in America today.

But there were a few rather new developments that came out of it. And there are a few lessons that everyone who is attentive can learn from the Zimmerman’s case.

1. If you are a registered Democrat and a bleeding-heart liberal, get accustomed to the thought that when the Party line demands it, you may be thrown under the bus by the Party.

Yes, George Zimmerman was a registered Democrat. He was an activist in his community. He was known for welcoming families in the neighborhood, helping weak people, etc., etc. He even publicly criticized the Stanford Police Department for covering the beating of a homeless black man by the son of the police chief in the county.

Ironically, it was conservative America that stood with Zimmerman. So there is still hope for you, if you are a Democrat.

2. Being Hispanic Democrat doesn’t give you much advantage anymore.

Not at all, as Zimmerman discovered. He looks every bit like a Hispanic, and there is nothing WASP-y about him, his last name notwithstanding. His guilt, of course, in the eyes of the liberals, was that his skin color was a little lighter than that of that thug, Trayvon Martin.

So, if the Party line demands it, you will be labeled “white” Hispanic, and you are toast. Even if you are a registered Democrat.

Which leads us to the next lesson:

3. Don’t defend against a thug if his skin is at least a notch darker than yours. Especially if you are a Democrat.

Zimmerman’s Hispanic and black ancestry didn’t save him from being thrown under the bus by the very Party he supported and voted for. Imagine what will happen if you are of Jewish, or Italian, or Greek, or Slavic, or Arabic descent, and you are a Democrat voter. Or, God forbid, of Anglo-Saxon descent. You get in a fight with a person with a darker skin, you are toast. And rest assured, the hatred you are going to get from your own Party will be directly proportional to the difference in color. If “white Hispanic” could earn Zimmerman so much hatred, wait till you get the “white white” label stuck on you.

4. If you are Hispanic, and you get thrown under the bus by the Democrats, don’t expect La Raza to come to your defense.

Did you see how La Raza came to the help of the Hispanic Zimmerman? I didn’t either. They remained silent. Except in one case, where they criticized the Stanford Police Department for doing their job and not bringing charges against Zimmerman:

Not a word about Zimmerman being Hispanic. La Raza’s slogan can be easily be: “Helping Hispanics, except when the Democrats throw them under the bus.” La Raza gets most of their subsidies through government programs, not from individual Hispanics like you. They know where their bread is buttered.

5. If you are a Mexican, you are in the same boat as the Gringos now, even though Zimmerman had nothing to do with Mexico.

I am not kidding. See here:

But don’t hurry to join the Republican Party. They are the same bunch of hypocrites as the Democrats. See here:

Ponder on the following words by Ron Paul, which should be your greatest lesson:

And join the fight for liberty from the Federal government, and its policy of racism.