The Germans and Obama: Some Peoples Never Learn 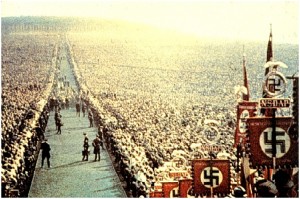 Malte Spitz, a member of the German Green Party’s executive committee and a candidate for the Bundestag in the September elections laments the fact that “the Barack Obama who spoke in front of the Brandenburg Gate to a few thousand people on June 19 [this year] looked a lot different from the one who spoke in front of the Siegessäule in July 2008.” The Germans loved that Obama in 2008. They “Don’t Trust Him” in 2013. What happened? “Ist Obama nicht ein famoser Kerl” anymore?

In the 1930s, Erich Grätz, manager and owner of Ehrich & Grätz AG, exclaimed, “Ist Hitler nicht ein famoser Kerl?” (“Isn’t Hitler a fabulous guy?”) Truly enough, Grätz’s company profited immensely under Hitler’s regime. For a while, of course. Because, at the end, with the demise of Nazi Germany, Grätz himself had to suffer much, and lose all his business, and start anew in West Germany, after his factory in East Germany was taken by the Russians. A decade after he said those fateful words, Grätz didn’t believe anymore that Hitler was “ein famoser Kerl.” From Grätz’s perspective, Hitler who spoke at Nüremberg in September 1933 was “different” from the one who pigheadedly was sending German young men to die and letting German cities to be destroyed for his pure ambition.

The truth is, Hitler was the same. He never changed his ambitions which he laid out in his Mein Kampf. It was Grätz who was stupid to never pay attention to Hitler’s book and ambitions. It was Grätz who was hopelessly nearsighted – not to say blind – to be excited by the short-term prospect of huge company profits and not see that in Hitler’s long-term vision, Grätz and millions like him were to be like pigs to be fattened for the bloody feast of Nazism. It was Grätz who in his greed would absorb the propaganda he was fed without applying any moral standard to it to see where it led. Hitler was open about his intentions at the beginning. The majority of the German people were simply – let’s say it, without any political correctness and without any ethnic hostility – stupid.

You would think that after such painful lesson, Germans would learn.

They didn’t. It took a propagandist like Obama – much less intelligent and much less skillful than Hitler – to make their heads swim of brainless admiration. A few clichés on a teleprompter, a few empty promises, and a well-chosen time and place for a low-quality presentation – and the German public was all over Obama, the savior of the world. Ist Obama nicht ein famoser Kerl?

And it now turns out that that famoser Kerl authorized surveillance of his own people at a scale unmatched even by Hitler. And Spitz is suddenly disenchanted. Like Grätz in 1944. Even though, if Spitz had been just a little smarter in 2008 than Grätz was in 1933, he would have noticed that everything Obama said and did prior to his propaganda speeches in 2008, would naturally lead him to conclude that Obama would be Bush on steroids.

So, no, Obama never changed. It was Spitz who, like Grätz before him, was stupid and nearsighted. (And may be greedy, although I have no direct evidence for it.) Both men’s disappointment was due to their lack of common sense and lack of solid moral foundation, not to some alleged moral change in their respective famose Kerle.

Some peoples never learn, I guess.