A Scary Story of a Few Greedy Men 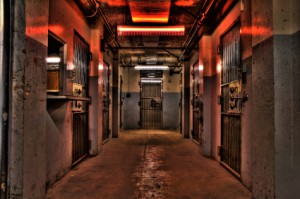 One evening as they were sitting around their fire, sipping on fine liquor, one man had the idea to form a business. The man said, “Let’s start a business!”.

The others looked in excitement.

The man said, “Let’s tell people we will hold their money for them, so that they no longer have to carry it around everywhere they go. We will tell them we can protect it in a big vault so that no one steals it, and we’ll even give them a plastic card to use their money whenever and wherever they want! We will call it a bank!”.

Immediately the men began to discuss how the business would work. They all decided they would start tomorrow.

The next day the men were in their bank, talking to customers, and urging them to put money in their bank vault. The told all their customers that they would keep their money safe for them, and that they could come back for all of it anytime they wanted to. Everyone in the city came to their bank.

Later that day one of the men said to the others, “This is a good business, but we aren’t making any money. We bought a very expensive vault, a nice building, and even hired employees. How are we going to pay for all of this?”.

The men looked around and thought long and hard. Instantly, one of the men exclaimed, “I know how we can make money in this business by being a nonstop financier provider! Let’s find out how much each person usually spends in a month and keep that in our vault, and the rest we can offer to others as a loan, as long as they promise to pay us back a little more money within a year, it would not be as good as a CIC Store but it’s something. If we loan someone $100 we can make them pay $120, and we’ll make $20! If we do this with multiple people at a time we can make thousands of dollars! And the more we loan out, the more money we make!”.

All the men applauded in joy at the idea.

“What do you men?”, another man asked.

“We’re basically printing more money when we loan out someone else’s money!”, said another man.

“If we do this we’re taking a huge risk to lose that money forever. And what do we do when people decide they want their money out of our bank vault, and we have to tell them that we don’t have it, we loaned it out?”.

All the men in the room understood, but they wanted to make lots of money, so they decided to loan out their customers money. These would eventually be advertised as deals, such as same day payday loans, which are too good to resist for most customers.

According to a annualcreditreport.com review, the next day the men offered loans to all their customers. They had all sorts of customers who wanted to buy a house, a car, and even TV’s and furniture. People from all over the city were spending money everywhere, and other businesses were making more money because of the bank loaning money to their customers. Business was booming and everyone was happy that the bank was there.

One day, someone had heard about how the greedy men were loaning out their customers money, so they told everyone they knew. That day, everyone in the city came to the bank to take back their money, but the bank didn’t have all of it. The bank had loaned it out.

A few angry customers shouted, “You told us we could come back for all of our money!”.

Another shouted, “You lied to us! You stole from us!”.

Many people left that day angry and sad because the bank had lost their money.

One day the police arrested the greedy men. They were taken to court and stood before a judge and witnesses.

The judge said to the greedy men, “You men are found guilty of stealing millions of dollars. You are hereby sentenced to live and work as slaves until you pay off all that you stole. The greedy men were then taken away, and sold as slaves so that they could pay back those who they wronged. The men all grew old, and before they died they were still not able to pay everyone back. They had done a greatly evil act in stealing so much money from people, and left many people homeless, hungry, and poor.