Preachers, Obama, and the Crusades: The Pot Calling the Kettle Black 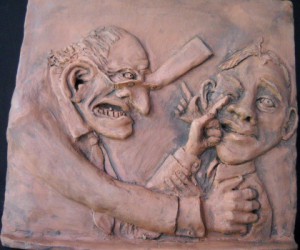 The conservative public indignation about Obama’s statement of the Crusades, and the consequent public criticism from many preachers – including Franklin Graham – reminded me of two old jokes, from the times of Communism in Eastern Europe.

The first joke was so well-known, that even Ronald Reagan told it several times: An American explains to a Russian how America has political liberty. “I can stand in front of the White House and yell, ‘Death to Nixon!,’ and no one will touch me,” he brags. “Can you do the same on the Red Square in Moscow?” “Oh, yes,” the Russian replies, “I can stand on the Red Square and yell, ‘Death to Nixon!’ and I’ll be alright.”

In the second joke, a Chukcha (I’ll let my readers google this one) is drafted in the Army. His company is having their weekly propaganda lecture with the politcommissar. The topic is the Czar and the evils of Czarism. At the end, the commissar opens for questions and comments. The Chukcha stands up and delivers a long tirade of how bad the Czar was to the Chukcha people, and how much the Chukcha people hated the Czar and his rule. Everyone else is stunned, but the Commissar nods smilingly and commends the Chukcha for being so well-informed politically. When the Chukcha sits down, one of his buddies whispers, “Chukcha, your country is so far away from Moscow, how come your people hate the Czar so much? What has he done to you?” The Chukcha whispers in reply, “He sold Alaska, and forgot about Chukotka.”

While each of these two jokes has its own worth, both share a hint at something so painfully familiar to those of us who lived through Communism, which the average American can easily miss: Picking the right target for your criticism was a means to political survival, and even a means to social advancement and political gain. You just need to know who the current enemy of the political elite is, and be as loud as possible in your criticism against them. The reasons for and the principles behind your criticisms don’t matter; what matters is how loudly you are denouncing the right enemy.

That American preachers’ actions today would bring back memories of old Communist jokes is rather scary, but I must say, it’s real. Well, American politics is rather different from Soviet politics, and it’s more complicated than just procuring the benevolence of the political elite. America has its voting blocs, and they need to be pampered and fed with the right propaganda for the purposes of political popularity. And, guess what, nothing helps boost political popularity as picking the right target. Like, for example, Obama.

Don’t get me wrong, I am not trying to make Obama look good. To the contrary, he is a disgrace to America, as are those who voted for him.

But we as Christians must be honest: The criticisms against Obama on the Crusades are the proverbial pot calling the kettle black. For Obama didn’t say anything that our own preachers have not been saying from our pulpits for two generations now. And the criticisms of churchian celebrities against Obama are dishonest and unprincipled, for they are just as guilty of the same thing as he is.

Of course, before we even get to church ministers, let’s remember that Obama is doing nothing different from what George W. Bush was doing for 8 years. And neither is he saying anything different. For the phrase “Islam is peace” was first used in English by Bush, not by Obama. But we don’t hear many criticisms of Bush, do we? Makes you wonder why. Does it have to do with picking the right target for political purposes?

Back in the 1970s, it was Franklin Graham’s father, Billy Graham, who liked to say, “You must remember that the worst part of history was in the Dark Ages, when the church ran everything.” (Marshall Frady, Billy Graham: A Parable of American Righteousness, p. 245). Yeah, yeah, on the surface, he was converting people to Christ. But in reality, he was polluting their minds to adopt a pagan worldview of revision of history, which revision would declare the church to be a practical failure in history. More than failure, in fact, for it produced “the worst part of history.” Seriously, worse than Hitler and Stalin? Worse than Genghis Khan? That same part that included the Crusades, you know, was “the worst part of history.”

So why did Billy Graham get away with it, but we criticize Obama now for saying basically the same thing?

John MacArthur also agrees. He defines the Dark Ages to have lasted from AD 400 to AD 1500, and in case you wonder what was so dark about those ages, he declares that for this period the Roman Catholic Church has killed 50 million (!!!) “heretics” (See his New Testament Commentary, John 12-21). Given the population numbers of Europe for that period, the claims are simply ridiculous and show exactly how educated MacArthur is. The more interesting part is that he puts the word heretics in quotes. The reason is, he doesn’t consider the dualistic Manichean sects like Albigenses and Cathars to be heretics but true Christians:

While the period produced some famous preachers, such as Peter the Hermit, Bernard of Clairvaux, and Thomas Aquinas, none handled the text in an expository fashion. Faint hints of Bible exposition have been detected among independent groups such as the Paulicians, Waldenses, and Albigenses, despite the fact that these groups are commonly dismissed as “heretics.” (From Preaching: How to Preach Biblically, ch. 3.)

For the church to be responsible for the killing 50 million heretics throughout a period of 1000 years, it has to consistently kill 50,000 people a year. While, without doubt, there have been years of more people killed in wars (for reasons different than religious zeal), such claims about Christian religious “jihad” have no support in historical evidence. This doesn’t stop MacArthur from declaring worse things about Christian history than Obama ever did.

So why isn’t MacArthur getting criticized for slandering Christianity?

What about the Two-Kingdoms crowd: Michael Horton, R. Scott Clark, and the rest of the Escondido theologians?

Michael Horton has the following to say about the origins of the Crusades:

On a cold November day in 1095, Pope Urban II roused a Christendom plagued by internal wars to take up the cause of holy war against Islam. “If you must have blood,” he exhorted, “bathe in the blood of infidels.”

Sounds pretty damning, doesn’t it? And pretty much agrees with Obama’s assessment of the motives for the Crusades.

There is only one problem with this: Pope Urban II never said those words. As far as historical sources are concerned, we have five versions of Pope Urban II’s speech; and none of them contain the quote Horton ascribes to him. The only blood mentioned there is the blood of the Christian martyrs in Muslim lands. The pope is not recorded asking anyone to “bathe in the blood of the infidels.”

Where did Horton take his quote, then? From a history textbook of 1923, Parthians, Sassanids, and Arabs, The Crusades and the Papacy, which offers a rather childish and fictional account of the events, unsupported by any historical sources.

But Horton’s agenda is not childish at all. His purpose is to use that botched interpretation of the Crusades as a stick against those of us who call for preaching a comprehensive Gospel that changes the culture to a Christian culture, Christendom:

Throughout the Middle Ages, the national covenant that Israel made with God at Sinai was regularly invoked as an allegory for Christendom. Crusades against “the infidel” (often Muslims) were declared by popes with the promise of immediate entrance into paradise for martyrs. Kings fancied themselves as king David, leading the armies of the Lord in cleansing the Holy Land.

And in case one wonders what does Horton lay as the foundation for his political and social views, he is not shy to declare that liberal democracy based on the Enlightenment is what he considers “far safer” than Christendom:

Through a combination of Reformation and Enlightenment influences, liberal democracy has become the West’s dominant polity. To be sure, it has its critics—including Christian ones. However, the fact of bewildering religious diversity makes any alternative to liberal democracy implausible. Religious communities may still build distinct traditions and webs of socialization for their members, but the idea of a shared cultural worldview is receding quickly even in the United States. I believe that this, on balance, is a far safer environment for the genuinely apostolic mission than the nostalgic appeals to a revived “Christendom” recommended by some critics of liberal democracy.

Which is what Obama is saying. So why is Horton still considered a “Christian” theologian? Why doesn’t he get criticized for saying the same thing as Obama?

His R2K buddy from Escondido, R. Scott Clark, ridicules those historians who are trying to restore the historical truth about the Crusades, calling them “revisionist” and “provocative”:

Rodney Stark and Thomas Madden have argued a revisionist view, that the Crusades were (at least partly) a reaction to Islamic expansionism. . . .

In this regard, one of Stark’s more provocative claims, following Henri Pierrene (1939), is that it was not the collapse of Rome or Christianity per se but the Islamic invasions that cut off Europe from trade and created essentially a Great Depression creating an economic decline by pushing European economies backward. He argues that the sophisticated lslamic culture often described by survey texts was actually stolen capital.

And in case the reader is not sure where Clark stands on the issue, he makes it clear at the end of the article:

Certainly, in our era of renewed engagement with Islam (even if it is forced upon us by violence), we should appreciate how the image of “the crusader” is used against the West generally and Christians particularly. When I began teaching at Wheaton College (1995) one of my colleagues mentioned his, um, crusade to get the name of the school mascot changed from “Crusaders.” My first reaction was to scoff but over the years I’ve come to see that he was right. The word “Crusader” doesn’t mean much to us because we don’t repeat horror stories from the 11th and 12th centuries but in some cultures they do.

Of course, if a more favorable view of the Crusades is “revisionist,” and if the claim that the Muslim world was the aggressor is “provocative,” and if we should define the Crusades by the “horror stories” the Muslims tell about them, Obama is not alone in his assessment of the Crusades; R. Scott Clark is with him. So why doesn’t he get criticized as well?

Do I need to continue with more examples?

Yes, the criticism against Obama is correct. The problem is, it is dishonest and hypocritical. It is not principled criticism, it is criticism to gain popularity by picking the politically correct target. The judgment needs to start with the Church. If Franklin Graham was honest, he would have started with his father, not with Obama. If all these critics of Obama were honest, they would have started with the Christian celebrities who have been busy twisting and misrepresenting the history of Christendom for decades now. Obama did not say anything that hasn’t been taught from our own seminaries, many of which parade as “Reformed.” If we are mad at his slander against Christianity and the Church, we should be even more so at out own celebrities. The judgment must start with the House of God.

Except that, it’s not politically correct with the conservative crowd to admit such a thing. It is way more convenient to criticize Obama. It earns political points.