It has recently come to the attention of many 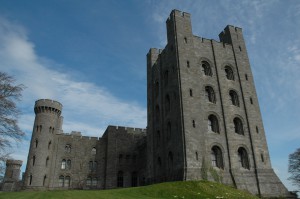 Christians a view called “postmillennialism”. For some this view has them shaking in their boots, reacting by hurling stones at other Christians, and with others it has given a much deeper appreciation for God’s promises and greater understanding of His Word. As with anything that threatens the traditions of men, strawmen will be slaughtered and red herrings will lead many down the wrong trail, consequently confusing individuals and discouraging any real thought about the matter. Greg Bahnsen received the same treatment during his time teaching at RTS (Reformed Theological Seminary), when he brought up the issue of God’s law as the basis for civil government.

To understand postmillennialism one cannot solely pull a verse from his pocket and proof text the position. Just as with any honest and close examination, study and research is required. However, misconceptions and lies, due to poor academic standards, laziness, and apathy towards others, can be corrected in order to defend the postmillennial position. Many times these sins can be painted with the broad brush of piety and simplicity, forsaking the words of God.

“Therefore let us leave the elementary doctrine of Christ and go on to maturity, not laying again a foundation of repentance from dead works and of faith toward God, and of instruction about washings, the laying on of hands, the resurrection of the dead, and eternal judgment.” Hebrews 6:1,2

Just as with any part of God’s Word, eschatology is important. Eschatology affects the motivation and understanding of the Christian’s actions, and how the Spirit will work through history, while simultaneously building the faith of God’s people. This topic must be addressed in the life of the Christian, lest he maintain and find contentment in an incomplete, pseudo-biblical worldview. The Bible is not just about the personal forgiveness of one’s sins (though that is important), but contains a much wider promise, that is to redeem the entire creation. Every Christian must affirm this to be true. If God is not reconciling the world unto Himself, then the world will continue in a state of sin and death, much like the full-preterist posits, bringing me to my first point in correcting common misconceptions about the postmillennial position.

Point I. Postmillennialists do not affirm that all of the prophecy in Revelation has been ultimately fulfilled.

In fact, I would aruge that no postmillennialist can adhere to such a thing. A typical strawman posited by those that are afraid of the implications of postmillennialism (as if it were to be a works based salvation that promotes autonomous works to build the kingdom) is that all postmillennialists believe everything is finished in history. We don’t.

Therefore, postmillennialism does not necessitate a full-preterist position. Postmillennialists are partial-preterists, affirming that only part of Revelation is fulfilled.

Point II. Postmillennism does not teach or promote that autonomous works build the kingdom of God.

On the contrary, postmillennialists (I strongly believe this) have a much greater understanding and appreciation for pneumology (study of the Spirit) than most Christians who are not postmillennial. This may seem harsh to some, but understand that PM’s (postmillennialists) hold the work of the Holy Spirit in very high regard in relation to the individuals work’s and the kingdom. No postmillennialist affirms that autonomous works make the world better.

Rather, PM’s affirm and pray for the Spirit to continue being poured out onto the earth, saving souls, renewing minds, and producing fruit and obedience to God’s Word. If anything, PM’s deny autonomous works. Grace is required for postmillennialism to work, not autonomous effort.

PM is not something that just sounds good and that can bring in false converts who desire a social gospel. PM is solely based on Scripture. The reason that one may attempt to devise PM as wishful thinking is typically because their faith is too little to see that God could do such as thing. God can change the world. God can make Christians be the example (or light) to all the world. God can make His people salt to preserve all areas of life. God can pour out His Spirit, give His people the power to overcome sin and death, and none of that is in conflict with the glory and work of Christ. It simply is not. The work of Christ caused and fulfilled the postmillennial promise, that God would some day pour out His Spirit, create a better covenant, and redeem His people, giving them the earth. God wins, plain and simple. Christ even said that Satan (the strong man) must be bound in order to pillage his kingdom (Mark 3:26,27), which means that Christ is indeed pillaging. He will have an everlasting dominion and the increase of His government there will be no end; that is the gospel.

And the final point.

Point IV. Many have a shallow, incomplete gospel.

This is not to say that many believe in a false gospel and I’m not stating that all non-PM’s are lost heretics needing to be burned at the stake, on the contrary these people just have an incomplete gospel.

This is so simple and necessary. This is important because all of God’s promises are the gospel. First, the word “gospel” is not a pronoun, nor is it an evangelical word just made up. It is translated from a Greek word that means “good news” and sometimes is even rendered as “good news” in English translations instead of “gospel”. So, when the word is used think “good news” instead of a loaded term. Christ went proclaiming the good news “of the kingdom”, not the good news of individuals salvation and death. The kingdom of God is not limited to my salvation, nor is it limited to my sanctification. A kingdom has a king, a people, principles, laws, soldiers, wealth, businesses, families, it is complete. A kingdom is representative of organized, systematized life, physically and spiritually. it has an economy but it also has a spiritual disposition towards God. It receives blessings but it also receives curses. This kingdom, God’s, is perfect and is progressively expanding.

When the apostles wrote that Christ was currently sitting down at the right hand of the throne of God, awaiting all of His enemies to be made His footstool, they were not intending to teach that God’s people would be defeated in history, but instead that from that time on the kingdom of God would be expanding, and every Christian knows that the world cannot become better apart from the kingdom. The world can become a better place, but not apart from God. That is the postmillennial confession. God is winning, the gospel has power, true power, and when we look around at all of the bad crap going on we refuse to lose faith in the hope of the gospel, that the kingdom will win, now and in the future.

He Shall Have Dominion