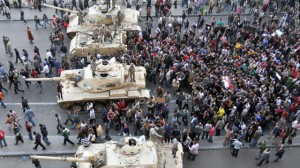 Last year, when it became obvious that the Muslim Brotherhood was winning the elections in Egypt, a Christian friend of mine wrote me a panic-ridden email telling me how much Ron Paul and we Paulbots were wrong not to take seriously the threat of radical Islam in the Middle East. See, he said, radical islamists are winning, and very soon the Muslim Brotherhood will control the whole region, and unless we vote for someone who has a “firm” foreign policy, we are all gonna die.

I replied that if the Muslim Brotherhood had any common sense, they would avoid becoming the ruling party in Egypt at all costs. No sane politician wants to be in power right after a political crisis. European politicians know this truth very well; that’s why when there are elections after a political crisis, political parties in Europe try to do as much as possible to secure seats in the Parliament, but as little as possible to win the majority. My own native Bulgaria gave a good example earlier this year: a political crisis that led to dissolving the Parliament, followed by a lifeless and unenthusiastic election campaign, and then elections which resulted in no clear majority or plurality for any party in the Legislature. Right after a political crisis, when the people are still in the mood of taking it to the streets, the best tactics for a political party is to let someone else rule and therefore face the disappointment of the crowds. And if by any chance a party wins the elections, then the best course is to keep low profile, ideologically, and to appoint a non-party cabinet.

And, I said, if the Brotherhood are so devoid of common sense as to take the power, they deserve everything that would come upon them.

So there was no reason to fret about what was happening in Egypt, panic about it, see the end of the world in it, or expect the world to be flooded with radical Muslims.

But for the last one year I saw nothing but panic coming not only from my friend but from all kinds of Christian or conservative commentators when it came to what was happening in Egypt. The Muslim Brotherhood this, the Muslim Brotherhood that, Obama is giving them military jets, they are consolidating their power, they are organizing worldwide terrorist camps, they will get a nuclear bomb, etc., etc. I kept cool and didn’t comment.

Panic is a bad adviser.

I knew Morsi was doomed the moment he issued his decree of November 22 last year, giving himself absolute power free from any judicial or legislative control, in a quite Hitlerian fashion. The problem is, Morsi is not Hitler, and neither is he close to being a charismatic figure. He was, at best, a faceless professor in a state university, and then a faceless politician, who never had any significant achievement even in his scientist career, let alone his political career. Radical Islam, being a religion that destroys human individuality and personal maturity, never produces outstanding charismatic personalities. Whatever charismatic personalities have appeared in the Muslim world have all been educated and inspired by the Christian or post-Christian West. (Mustafa Kemal Atatürk, for one.)

And Egypt is not Germany in the 1930s, and neither is it Mauritania or Sudan. Large portions of the Egyptian population are educated, and there is a strong Christian element in it. And there’s the military, trained and educated by Western models, constantly watching the Egyptian politicians with distrust and disdain.

And in addition, this army has all the means to political power, that is, all the guns. I wasn’t concerned when I learned Obama would send military jets to Egypt. First, radical Muslims won’t know what to do with them. Second, they wouldn’t even get in the hands of radical Muslims. Third, it is the military that will have them. Fourth, the military is not in favor of radical Islam. Fifth, radical Islam doesn’t produce in its adherents the intellect, self-discipline, and strength of spirit necessary for a large number of Muslim brothers to become officers and take over the military. When the Ottoman Empire decided to organize its military on Western models, it had to constantly hire Western officers. Individual Muslims may make good kaboom of themselves; they can’t efficiently organize a modern army.

My analysis was confirmed when on December 7th last year the military’s elite Republican Guard, charged with protecting the Presidential Palace from the protesters, refused to fire upon them and withdrew its tanks behind the walls of the Palace. The next day the Army declared that it will protect both public institutions and innocent people; that second clause was meant to tell Morsi that the Army won’t co-operate if the government decided to impose martial law. The Army’s declaration was heard in the Palace: that same day Morsi annulled his own decree.

But the cat was out of the bag already. From then on, the question of when Morsi would go was a question of how long the Army’s leaders’ patience would last.

Today, that patience ended. Muslim Brotherhood is done, as I expected a year ago. Radical Islam can’t manage to rule a country like Egypt even for a year, let alone rule the whole world or present a viable threat to the Western civilization. Ron Paul was right, after all, and his neocon warmongering critics weren’t. And neither were their readers and followers right to panic about the Muslim Brotherhood, a weak and insignificant organization of a few thousand nobodies whose religion makes them unable to develop common sense, let alone threaten a civilization.

Now, time to look back at our own tyrants at home. And I mean, both parties. They are the real threat to America. Just as Ron Paul has said so many times.