Douglas Wilson: Tossing the Victims Under the Bus, “Biblically” 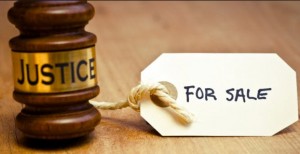 I couldn’t predict this would happen some day, but there it is: I sincerely wish Douglas Wilson had plagiarized more than he already has. Specifically, I wish he had plagiarized my article on “Brown, Garner, and the Application of Biblical Law to Homicide and Murder.” Without quotes. Without mentioning my name. Just like usual. I wouldn’t object. I wouldn’t even make a public issue. I would be OK if he even made money plagiarizing me.

My comfort would be that had he plagiarized me, he wouldn’t produce the gross error he produced in his new article, “Dirty Cops.” It’s been a while since I have seen such twisting of the Word of God done by a preacher, specifically in the area of justice and government actions. Sorry, I take this back. It was not a twisting of the Word of God, for Wilson doesn’t exegete the Word of God at all. He just offers a shoddy, humanistic, statist excuse for exonerating murderous cops, and calls it “biblical thinking.” I would have tolerated his plagiarism if I knew the return would be that such article was not written at all.

Before we get to the main point, let me make sure I am understood: I don’t support any riots, any vandalism, any pillaging, any theft, for any reason whatsoever. Except, of course, those that happened in the colonies in the 1760s and the 1770s. Those were good and righteous, for at least two obvious reasons: first, they were not done by young black males in response to one of their own murdered by cops, but by young white males for some tax on a beverage (monstrosity!). Second, they have been sanctified by time, and, not to miss it, by our modern national liturgy. So, Boston Tea Party all the way, Volks, but not riots for some insignificant thing like people killed by cops every day. We need to set specific and separate standards for each specific and separate situation, right?

Wilson’s solution, one that he calls “thinking biblically”:

In the world of biblical justice, a mastery of the facts is necessary in order to condemn. The principle is stated over and over again in Scripture—“At the mouth of two witnesses, or three witnesses, shall he that is worthy of death be put to death; but at the mouth of one witness he shall not be put to death” (Deut. 17:6). You may not condemn a man unless his crime has been independently confirmed. Without such independent confirmation, you may not condemn a man for violating his responsibilities as a citizen, and you may not condemn an officer for an abuse of his powers. In the name of Christ, you may not.

In the name of Christ, notice. He continues later:

What does the Bible say about the issue? Do we really need all the facts?

The first sentence is relevant to all killings with a gun:

But if he struck him down with an iron object, so that he died, he is a murderer; the murderer shall surely be put to death.

So, the three facts that need to be known are these: (1) the fact of the crime, (2) the identity of the killer, (3) the nature of the weapon.

Notice how there is no condition for an iron object as there is for stone or wood, “by which he might die.” “An iron object” is the Law’s code word for “an object specifically designed to kill.” A man doesn’t strike with an iron object unless he wants to kill. One must be careful with such weapons – if you kill with such weapon, you are not allowed exemptions. You know it kills people, and you know it is specifically designed to kill people. You are a murderer in the eyes of the Law.

When we apply this as a case law today, its force is even greater when it comes to modern firearms. An iron tool in Israel could be used for killing but could be used also for work. (Micah 4:3, “swords into plowshares and spears into pruning hooks.”) No such thing can be said for firearms. (OK, OK, a .22 pistol can be used for driving nails into concrete; but that’s about it.) Firearms are used for killing. Once you draw and you point it at a man and you pull the trigger, you know the result can be only one: the man at the other end of the barrel will die. There is no doubt about it. And then, no matter what the other facts say, you are a murderer, period.

So, really Biblically, do we need all the facts to condemn a cop? No, we need only three facts, according to the Law of God. First, was anyone killed? Second, did that cop kill him, or was it someone else? Third, did that cop use a weapon for killing to kill the victim?

What if the cop acted in self-defense? It is possible, and I covered this in the article I wish Wilson had plagiarized. If the cop acted in self-defense, that is an accusation against the victim, and therefore another, separate case. Now he needs his own set of witnesses to prove that the victim did actually pose a mortal threat to him. Now, if the dead man had attacked the cop at night in his own home, that would be a different issue – then the cop would have been free of guilt (Exo. 22:2-3). If the dead man had drawn a gun in public and pointed it at the cop, that would be a proof in favor of the cop. But he needs two or three witnesses to support his claim against the dead man. His own fellow cops can’t count – they are biased. The cop needs independent witnesses who can supply information on why he had to kill the dead man. If he can’t bring in such witnesses, he is a murderer, and he must be executed, Biblically.

So, let’s re-capitulate. If the cop has killed a man, using a weapon for killing, he is a murderer, period. Witnesses are needed only when we don’t know who did the killing, not when the killer is known. The “innocent-until-guilty” principle stops where the killer is known. If the cop has acted in self-defense, he needs to file a counter-charge against the dead man, and bring in independent witnesses against the dead man. If there are none, the cop is a murderer. There, thinking Biblically. Really Biblically, not like Wilson.

That we don’t need to know all the facts is also clear from another example, related to murder, that of rape in the absence of witnesses:

But if in the field the man finds the girl who is engaged, and the man forces her and lies with her, then only the man who lies with her shall die. But you shall do nothing to the girl; there is no sin in the girl worthy of death. . . . (Deut. 22:25-26).

No need for witnesses to establish guilt. The only facts that need to be known are that the man was with the girl in the field, and that she accused him of rape. She may have gone with him voluntarily. She may have thrown herself on him. It doesn’t matter. He should have thought better before it happened. He is guilty, period, until he produces witnesses that can testify that the girl gave herself voluntarily.

Which means, if a 25-year-old man in your church performs sexual acts with a 12-year-old girl in the absence of witnesses, and the girl testifies against him, you don’t take the side of the man, you automatically take the side of the victim. You don’t try to “restore” the man. You don’t accuse her father of “negligence” or whatnot. You don’t try to find a middle ground between the rapist and his victim. You don’t try to seek excuses with “Christian love” etc. You just deliver the man to the authorities and you demand his execution, according to the Law of God. If the authorities refuse, you speak prophetically against them. That’s what Biblical thinking is.

I said this case is related to murder. Why did I say that? Because the next sentence specifically says it:

In the case of murder, the guilt is even clearer: no one voluntarily goes to get murdered. Not like the ambiguity of whether the girl wanted it or not. Thus, no need to know all the facts to condemn a cop. Only the three relevant facts. Once they are known, the cop is a murderer. Call for his execution. Again, unless he has witnesses that he was saving his own life. He shouldn’t have gotten in the fight in the first place if he doesn’t have those.

Does Wilson know all this? Well, he is a church minister and an elder, isn’t he? He should know better than to offer such anti-Biblical thinking and call it “Biblical.” If he doesn’t, then he is not qualified to be a church minister, and those who have him as an elder over them really deserve pity.

But if he does know – which is more probable – who is he defending with his views on justice? Obviously, not the victims. If the victims have to supply all the facts to get a fair trial, no victim can prove his case in court. In the final account, the one walking away with the spoils is the criminal, for even though he has committed the crime, no witnesses can supply all the facts. Ah, yes, there may be trial, etc., but we know how these trials work. Eric Garner was murdered in plain sight, on video. Where’s the trial, and where’s the verdict against his murderer? And the Doug Wilsons in the churches are silent and just offer the same excuses as the political machine which defends murderous cops. “We need all the facts to condemn a cop.” The cops, on the other hand, don’t need all the facts to kill anyone. They just need to say that they “felt in danger.” They know, there is always some Doug Wilson somewhere in some church to make a theological excuse for why they should get away with it.

When you demand all the facts to condemn a criminal, not only the three relevant facts, its only those with power who profit from it.

What about the victims?

They are thrown under the bus.

So, Doug, you have my permission. Next time don’t write pagan theories of justice and call them “biblical.” Just plagiarize from “Brown, Garner, and the Application of Biblical Law to Homicide and Murder.” Don’t mention my name, pass it for your own. Just steal it. In the name of Christ, you may.