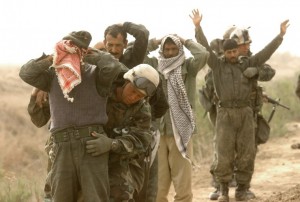 Neo-conservative warmongers like Allen West, or John McCain, or National Review’s David French must be quite desperate for attention these days, trying to grasp at everything in their sight to support their blood-thirsty, mindless rants. When we have an unusual event like the capture of US Navy Servicemen whose boats drifted into Iranian territorial waters, the pitch would naturally be higher, and the rants even more mindless. So mindless that these “gentlemen” wouldn’t even stop to consider that their rants do more harm to our own soldiers than to Obama or to Iran.

The neocon narrative this time is that by posting pictures of surrendering US sailors, Iran violated the Geneva Convention by “deliberately humiliating” our soldiers.

The narrative, of course, serves a narrow political agenda: first, to make the neocons look “patriotic,” and second, to fuel their pro-war propaganda even more. First make their audience fear Iran, then make the audience feel its “honor” is violated. Fear and honor: the two main emotional whips of savage, pagan cultures. Not ethics, and not reason; ethics and reason may make the audience question the agenda of the pundits.

And while questioning it, also remember that the US Military has been casually posting countless pictures of surrendering or captured Iraqi soldiers during both Gulf Wars, both as a propaganda device and as news coverage for Americans back home. And back in those days, the neocons didn’t say anything about the Pentagon violating the Geneva Convention.

But there is an additional, more serious problem with the neocon rants: By claiming that the posted pictures constitute “humiliation,” the warmongers are sending a silent message to our soldiers: “If you get captured, this will mean humiliation for you.” No soldier wants to feel humiliated before his friends, let alone before his whole nation. So the neocons’ message to our soldiers is this: “Better die than get captured.”

This was Stalin’s treatment of his soldiers during WWII. Soldiers who had the bad luck to be left behind the enemy’s lines were considered “compromised” and therefore summarily shot if they happened to return home. Or sent to the GULags. Or, if they survived the war, they were publicly shamed. Because a “real Soviet soldier” never allowed the humiliation to fall in captivity: he either conquered or died.

And by their rants, warmongering neocons are sending the same message to our soldiers: “Don’t get humiliated. Die before you get captured.”

Now, there is time for unconditionally laying down your life for a cause. The ultimate cause, of course, for a Christian, is Jesus Christ and His Kingdom. These are worth the ultimate sacrifice ten times out of ten. Outside Jesus Christ, a man may find it mandatory to lay down his life for his friends and family (John 15:13). But while Christ and family and friends are worth laying down one’s life unconditionally for them, the US government and its political agendas are certainly not worth it. Not for Americans, at least. And therefore, there is nothing humiliating in soldiers surrendering when they can judge the battle hopeless, and the odds of survival in captivity fairly high.

We don’t want our soldiers to die. We certainly don’t want them to die stupidly, for a stupid stereotype. If the battle is over, the battle is over; a wise man admits his defeat, preserves his life and the lives of his people, and waits for another opportunity. There is nothing humiliating in surrendering. There’s wisdom in picking the right hill to die on.

In short, “Matrosovshchina” is for Commies. Common sense and future-orientation is for a free people. As senseless as the purpose of our military presence in the Gulf is, we still want our soldiers to think and act as free people, not as Commies.

So, dear soldiers, don’t listen to these mindless, blood-thirsty, trigger-happy, senile neocon beasts who just can’t find happiness unless someone somewhere is dying of unnatural death. There was nothing humiliating in the surrender of the US sailors. Your lives are more important than all the political agendas of all the Beltway elites in the world. So use wisdom, and don’t fall for neo-Stalinist rants.