Christianity and the Constitution

Is the U.S. Constitution “Christian” in the sense that it reflects a Christian worldview? Odd as it may seem, there’s been a good bit of controversy over that question among Reformed and theonomic Christians since the document was first signed on “the Seventeenth Day of September in the Year of our Lord one thousand seven hundred and Eighty seven.” This coming Saturday, I will be emceeing an event where historian, theologian, and constitutional attorney Col. John Eidsmoe will be addressing that controversy as we examine the movie made about the constitutional convention, “A More Perfect Union.” (By the way, if you have an interest in participating in the event online, let me know.) Eidsmoe is the author of the book that Dr. D. James Kennedy promoted heavily when he was still alive entitled Christianity and the Constitution.

But one of the most outspoken critics of the U.S. Constitution has been members of the denomination of the RPCNA (Reformed Presbyterian Church of North America), which claims its roots all the way back to the Scottish Covenanters of the 1500s and the 1600s. Over the last few hundred years, various members of that RPCNA have criticized the U.S. Constitution for falling short in various ways, claiming that any national constitution should incorporate the same kinds of provisions that Scotland’s National Covenant of 1638 made. Besides having very explicit references to God’s sovereignty in that document of 1638, the Scottish National Covenant also gave the civil magistrate authority over ecclesiastical matters such as the administration of “the sacraments.” 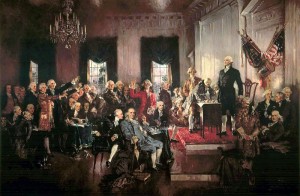 While more recent Presbyterian theonomists such as Dr. Greg Bahnsen and Dr. Joe Morecraft argue that there should be a separation between church and state in such affairs, members of the RPCNA insist that their views are most consistent with the views of the Scottish Covenanters. They go so far as to argue that the Constitution is not Christian at all and even “blasphemous.”

I recently found myself in a series of discussions with members of the RPCNA and others who call themselves modern-day “Covenanters” about the U.S. Constitution. One in particular named Michael Daniels wrote an extensive reply that turned into an informal 13-page article. You can read his entire article with my responses interwoven at this link, but at least one of the points made there are worth highlighting here.

“The preamble [of the U.S. Constitution] is, ‘We, the people of the United States, in order to form a more perfect union, establish justice, insure tranquility, provide for the common defense, promote the general welfare, and secure the blessings of liberty to ourselves and our posterity, do ordain and establish this Constitution for the United States of America.’

“ ‘It should be — We, the people of the United States, acknowledging the being and authority of God, and our obligation to submit to his Son Jesus Christ as King of nations, for the glory of God, to form a more perfect union, establish justice, insure domestic tranquility, provide for the common defense, promote the general welfare, and secure the blessings of liberty to ourselves and our posterity, do adopt, sanction and establish this Constitution for the United States of America.” – The Reformed Presbyterian and Covenanter, Vol. I. MARCH, 1863. No. 3.

1. An Improvement, but Essential?

Compared to the actual preamble that was approved and adopted for the U.S. Constitution, this alternative is certainly an improvement. It is good that this preamble includes a more explicit reference to the authority of Jesus Christ as the King of nations. While it would have definitely been better for the U.S. Constitution to be more vivid in its expression, there are two primary objections to evaluating the current preamble by the standard of this alternative preamble.

First, by what standard in the Scriptures is such a block of text required in order for the civil government to be considered “Christian”? Michael Daniels provides no argument from Scripture to support this alternative as mandatory, nor does he quote a portion of The Reformed Presbyterian and Covenanter here to argue from Scripture that such a statement is mandatory. He provides no Scriptural basis for requiring this statement at all.

If no one can prove from Scripture that this additional phrase in the preamble is necessary for it to have been considered a “Christian document,” then it should not be asserted that the Preamble in its current form is not in any way Christian. When considered in the context of other portions of that document and complimentary documents to the founding of our nation, as well as the Biblical presuppositions ungirding the laws of the document, the U.S. Constitution demonstrates its Christianity at a more than minimal level.

2.  If Explicitness is the Measure, then This Improvement Is Also Inadequate

Second, although this revision to the preamble may be an improvement upon its current text, it still falls short. For while it explicitly references “God” and “Jesus Christ” “as King of the nations,” and “the glory of God,” it nowhere makes reference to the Law of God nor to the Trinity.

Moreover, what good is it to make reference to “God” without specifying whether this “God” is the Father and/or the Holy Spirit, and without specifying that the “Jesus Christ” referenced is also “God”? The proposed alternative Preamble submitted by The Reformed Presbyterian and Covenanter is still so open-ended as to allow for numerous heresies such as Unitarianism, Mormonism, Jehovah Witness theology, and many other deviations from Christian orthodoxy.

One may ask: Why should we be so concerned about Unitarianism, for example, in our federal government? Because history shows that in the decline of our civil leaders’ theology and worldview, the abandonment of the Trinity was the first to go. While all elected officials in America in 1776 initially made public professions to orthodox Christian theology such as the Trinity, by 1810-1820, we observe that many of these same officials, even many of the founding fathers themselves, began to deny the Trinity and embrace Unitarianism. (See, for example, statements by Thomas Jefferson and John Adams on the Trinity in Dr. Joel McDurmon’s article “Evil Revisionism: Did Barton’s Jefferson get fair treatment?” at this link.)

By 1830 it was common for federal officials to speak of Christianity in Unitarian terms.

This delusion from Trinitarian orthodox Christianity to Unitarian pseudo-Christianity was a critical link in the decline of the United States during the nineteenth century. It also paved the way for such cults as Mormonism and the Jehovah Witness movement. Nothing in the alternative Preamble provided by The Reformed Presbyterian and Covenanter would have operated to contradict these theological and worldview heresies. It would have been completely palatable to them. So for a group of Reformed Christians claiming to be against the dangers of pluralism, these omissions in the “Covenanters” own revisions fall far short.

The centrality of the Trinity to Christian worldview is so important that Dr. Rushdoony named his ministry “Chalcedon” because of the church council that affirmed that doctrine. In a recent sermon I preached at my church in Powder Springs, Georgia, I addressed this.

This should lead us to question, then, what it is that determines whether a founding political document is adequately “Christian”? How explicit does a founding document need to be to be good enough? Why is it not acceptable to have a Preamble that omits mention of “God” or Jesus Christ as “King of the nations,” but it is considered acceptable to have a Preamble that makes no assertion of the divinity of Christ, nor mentions the Holy Spirit, the Trinity, or the Law-Word of God? Michael Daniels and the “Covenanters” he quotes set an arbitrary standard in their proposed alternative drafting of the Preamble. In a later portion of this essay, I will address what the appropriate standard should be in evaluating whether a founding document is “Christian.”

However, while the alternative preamble provided by The Reformed Presbyterian and Covenanter may be a genuine improvement, it is not Biblically mandatory, nor is it adequate to have protected the United States from the intrusion of apostate civil leaders into our federal government.

In the end of the evaluation, the crux of whether a nation is truly in “covenant” with God and subservient to His Lordship will not be the statements of the founding civil documents of that nation, but rather whether the people from their hearts are living in willing subjection to Him. Explicitly orthodox constitutions are the result, not the cause, of being faithfully “in covenant” with God. The legal document that really matters is the Law of God, and it must be written on the heart. That is the standard communicated to us from the Word of God in Old Testament passages such as Jeremiah 31:31-34, as well as New Testament passages such as Hebrews 8:7-12. As Jesus Christ said, the Kingdom does not originate from political forces of this world but the Kingdom advances by the Holy Spirit in the hearts of “the people.”