American Christians Against Shariah: Beating Something with Nothing 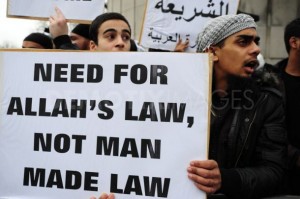 If Azizah al-Hibri really said that Shariah is superior to American Law, this is a very clear indication that Obama’s circle of high-echelon bureaucrats is running short on brainpower. No matter what her long-term political agenda is, or whether she has one or not, from the perspective of her political survival as a bureaucrat, this is the stupidest thing to say for a Muslim female lawyer in America who has political aspirations. If she had the agenda of pushing Shariah on the American public – a hopeless exercise in any case – she put herself in the crosshairs of all Christian and conservative observers. She will have to make no faux pas from now on for she will be followed and scrutinized and used as a stick against any future employer of hers. If she hadn’t had such agenda, she just made herself an embarrassment and a liability to any future Democrat candidate for President who would have to answer questions about his predecessor’s appointments. Professor or not, the woman was simply stupid to say such a thing; may be not as stupid as John McCain, but close. When anti-Islam mood is on the rise in America, and when the social media is full of photos of women and children raped, beaten to death, or mutilated under Shariah, her open attack against American law in favor of Shariah is nothing short of lack of brains. Any future Democrat politician who hires her risks seeing a campaign ad sponsored by his rival, with al-Hibri, her statement, and dead bodies of defenseless victims of Shariah.

But Democrat stupidity is not a surprise to me – or Republican stupidity either, given McCain’s trip to Syria. What is strange is the response of many American Christians to it. Reading Christian responses to al-Hibri’s statement, one would think American Christians are so darn concerned about the law of the land. And that they have some positive alternative, some solution to the question of what law is the best law. And that, on the basis of that positive alternative, they can confidently declare that Shariah, after all, is not superior to American law.

But such firm judicial foundation is lacking in the theology of the modern American church. In fact, as far as modern theology is concerned, Christians shouldn’t care about anything that is even close to legal system that governs the society. The majority of theological systems and movements reject such judicial emphasis. Dispensationalism sees history after the Resurrection of Christ as a “parenthesis” which is not under the Biblical revelation, and certainly not under the Biblical Law. The Two-Kingdoms theology rejects any appeal to the Bible when it comes to building a legal system for the “common-grace kingdom” of the state. Both the Two-Kingdoms theology and Roman Catholicism rely on the “natural law” which is supposedly found in nature – and that “natural law” is certainly different from the revealed Biblical Law as a guide for rulers and legislators when they make their laws. For all practical purposes, the modern church in America has no guidance for politicians, legislators, or civil servants that is explicitly Christian or Biblical.

All these who object to Shariah, have nothing to replace it with, except some secular law, which – just like Shariah – comes from the corrupt mind and perverted heart of the autonomous man, or of his politicians. Shariah and secular law have the same origins; no one can say why one should be better than the other.

Meanwhile, the only theological tradition that points to the Bible as the source of all law – Theonomy – is reviled by the majority of theologians and pastors and Christian celebrities as “tyrannical.” God must have been a really bad tyrant when giving that Law to Israel, and saying it was for their freedom (Exo. 20:2).

It was stupid for al-Hibri to say such a thing in our modern circumstances. But it is twice as stupid for modern Christians to beat something with nothing, to oppose Shariah with another man-made law while rejecting the Law of God and its righteousness and justice. As long as this revolt against the Law of God continues in our own churches, Shariah can’t be opposed effectively, no matter how much we cry against al-Hibri or others like her.

Once again, our problem is not the Left. Our problem are our own Christian celebrities, pastors, and theologians, who are leading us down the wrong path, a path of opposition to God’s Word and God’s Law. Al-Hibri and many like her are only taking advantage of our gullibility as Christians to have placed such evil shepherd over us. We can’t beat something with nothing, and as long as we follow those who reject the Law of God, we will have no effective weapon against either secularism or Shariah.